With its green hills, dotted with solemn cypresses that stand guard over old medieval castles, Umbria is immersed in a fairy-tale atmosphere. In the evening’s silence, when the air gets chilly and scented, you can easily imagine stories of fairies or brave knights.

What I didn’t expect though was to come upon a story that tastes like a modern fairy tale. A story that tells of ideals and possible worlds, in which words like capitalism and ethics not only do not dissonate, but are indeed deeply intertwined.

It’s the story of a little boy, Brunello, who leaves the peaceful Umbrian countryside to move to the city with his parents. Still very young, he can read in his father’s eyes the toil and humiliation of factory work. And in that tired look – more than in any of the values he learns from his parents – Brunello grasps the importance of respecting human dignity. Growing up, he doesn’t forget and when at 25 he starts his own business, he does it his way. Betting everything on quality. Not just the quality of his products, but first and foremost that of his employees’ working and living conditions.

I felt that profit for profit’s sake was not enough, and that had to be a higher, collective purpose. […] giving business a meaning that goes beyond profit and reinvesting to improve the life of workers, to enhance and restore the beauty of the world.

The opportunity to fulfill this double goal comes in the form of a small medieval town, Solomeo, about 15km West of Perugia. In this half-asleep, timeworn village, 32-year-old Brunello glimpses the future of his company: the place where it can evolve and effectively become a community. And that is exactly what happens. Thanks to Brunello and his business, Solomeo’s 14th-century castle gets restored to its former beauty and a new life of offices, workrooms and colorful cashmere collections floods in. Then from the castle life does what it does best: it spreads. Like sap it flows throughout the village, arousing Solomeo from its centuries-old sleep. 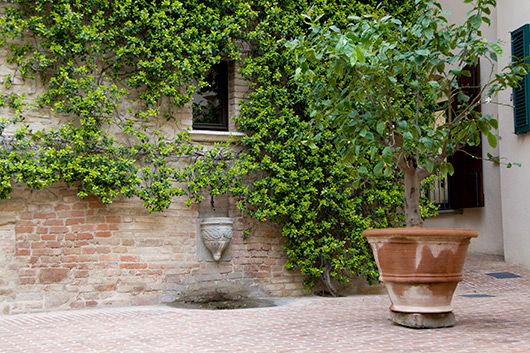 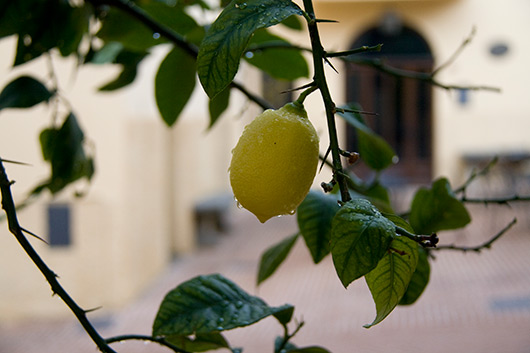 Life is back in Solomeo

Within the castle, offices and workrooms are bright and tastefully furnished. Like paintings windows frame the surrounding landscape, letting the calmness of the green Umbrian countryside in. Despite the machinery and many busy working women, it looks anything but a factory. 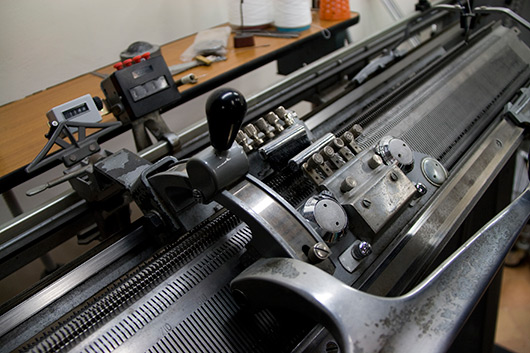 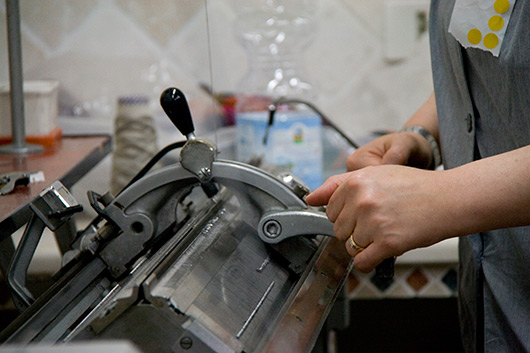 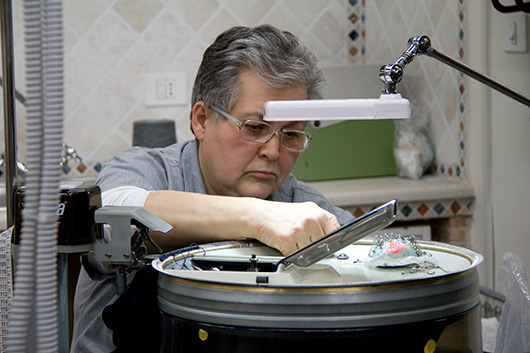 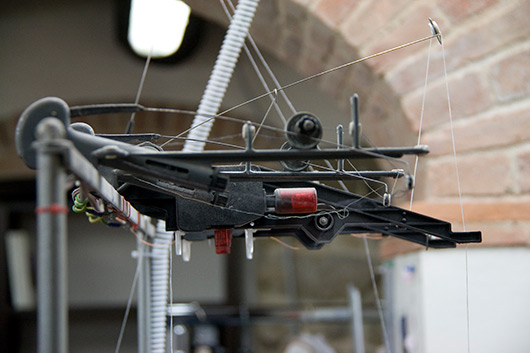 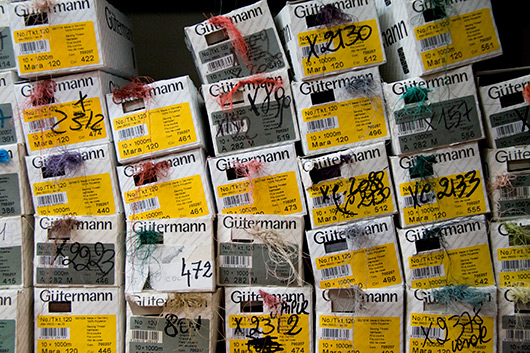 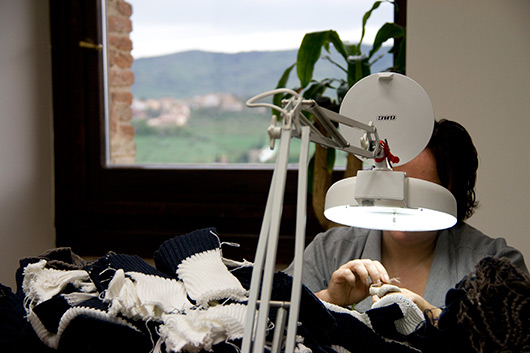 It’s not all about the look, either. Within the company everyone’s work is treated with trust and respect: nobody in Solomeo has to punch the clock and salaries are 20% higher than the national average. By respecting people’s work and giving his employees a pleasant working environment, Brunello turned what could have been just another knitwear factory into a unique, close-knit community that rests on a scale of shared values.

[…] whoever works with us is a part of the company’s life, no matter what job they do: everyone knows that their work is a key part of a greater whole.

Convinced that a company’s quality is the direct result of the inner qualities of every employee, Brunello cares for his business by caring for his employees. This is why every year so much as 20% of the company’s annual turnover is reinvested in Solomeo’s further development, at each turn taking the shape of a library, a theatre, even a “Philosophers’ Garden” where employees can stop for meditation. 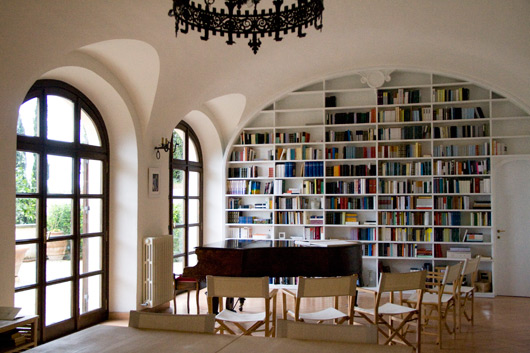 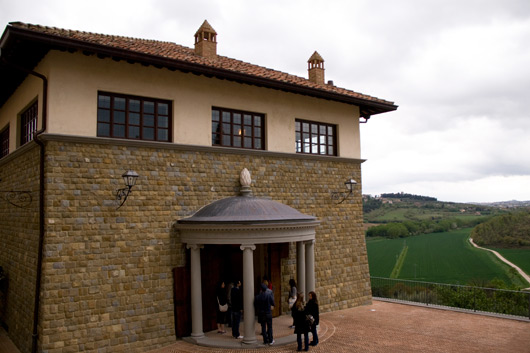 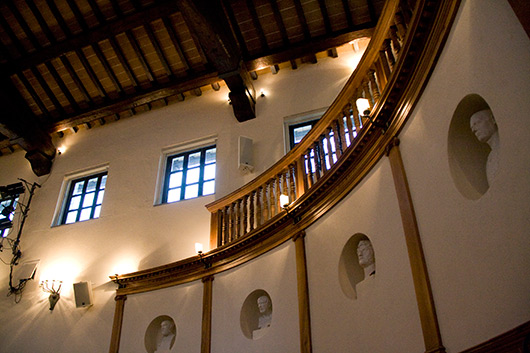 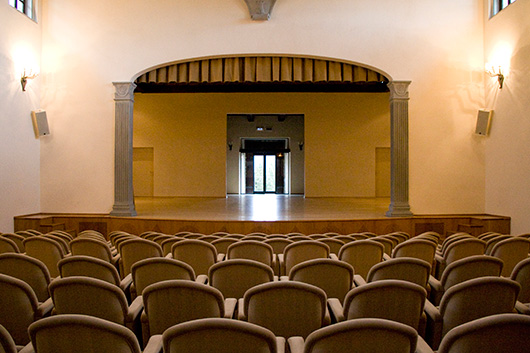 I dream about a modern form of capitalism with strong ancient roots, where profit is made without harm or offence to anyone, and part of it is set aside for initiatives that really make a difference in people’s lives […]

Solomeo is the embodiment of this dream, the physical and tangible proof that capitalism and ethics not only don’t rule each other out, but can coexist and actually feed one another. While Brunello Cucinelli’s business philosophy might sound like wishful thinking, in fact, its results are far from imaginary. With 50 mono-brand boutiques and sold in 1000 multi-brand stores all around the world, Brunello Cucinelli is internationally recognized as a high-quality informal luxury brand. Counting over 700 employees, the company ended 2011 with a turnover of 234.5 million euros, showing a steady growth despite the economic crisis (+ 19.1% compared to 2010).

Could it be that putting people and their dignity at the centre, investing to create a better life for everyone, pays off better in the long run than chasing profit for profit’s sake?

Disclosure: I travelled to Umbria to attend the TBU conference and had the pleasure of visiting Solomeo and learning about Brunello Cucinelli’s story during one of the post-conference trips organized by the Region of Umbria in cooperation with Umbria on the Blog. Nevertheless – as always on this site – all views and opinions are mine and mine only. Brunello Cucinelli’s quotes come from the company’s website (requires Flash Player).

My first taste of Umbria Learning how to fly